The Return of the Mens Volleyball Team 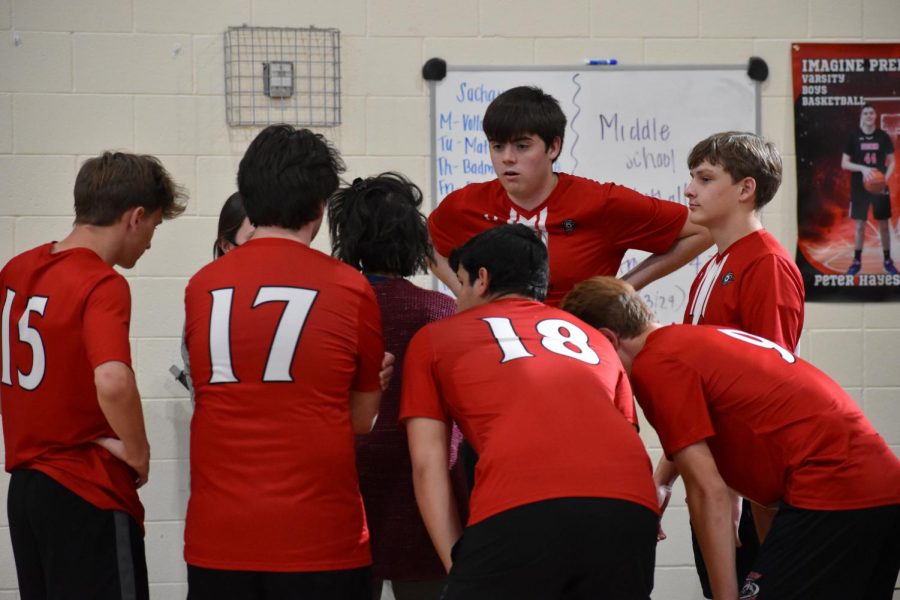 The team huddled up during a time out to listen and learn from Coach Pupo.

For the first time in a couple of years, Imagine Prep Surprise has a mens volleyball team that is competing in games. A lot of the team’s members are new to the sport, and they had their first game on April 8. The game ended with the Storm losing, two sets to one; which is pretty good for their first game with players who are all newer to the sport.

Alexa Pupo, the coach of the mens team, talked about how much she’s enjoying coaching this group of athletes.

“I am very excited to coach the team,” Pupo said. “We truly have a great group of individuals, who are passionate about learning the sport. It’s also been enjoyable to bring a spring volleyball team back to the Prep!”

Assistant coach and senior Riley Hobbs said she is also having fun coaching the mens team and seeing them grow in their skills.

“It is super fun coaching them and seeing them get better each practice,” Hobbs said.

Nolan Casaccio is a sophomore on the team and said that he had no experience in volleyball but wanted to play for fun.

“I have absolutely zero experience playing volleyball,” Casaccio said. “I wanted to play volleyball because a lot of my friends were playing and it sounded like a good time and a lot of fun.”

Casaccio talked about the pros and cons of the mens team.

“I am enjoying playing volleyball,” Casaccio said. “The players are a lot of fun and the coaches are great. I don’t like waking up so early in the morning (for practice), but other than that there isn’t much to dislike about the sport.”

Hobbs stated that the boys team doesn’t have a bunch of members.

“Unfortunately, there weren’t a lot of guys coming to practices but we are working with what we have,” Hobbs said.

It’s clear the mens team is working hard to learn the skills of this sport. The team will play more games throughout this season having more time to grow.