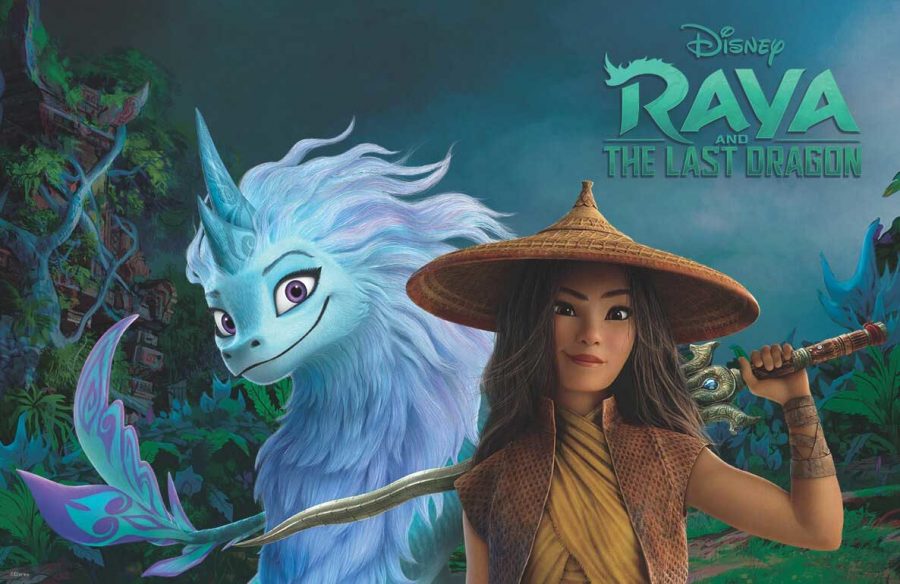 As COVID-19 vaccines become more and more available to the general public, restrictions around social distancing continue to loosen, allowing movie theaters to reopen their doors. Available both on Disney+ and in limited theatrical release, Disney’s latest animated film, Raya & The Last Dragon, features a South-East Asian princess protagonist named Raya, whose goal is to unite all five pieces of a broken gem containing “dragon magic”, in order to defeat a swirling purple plague called the Druun.

Disney has been setting their stories in the same generic European fairy tale kingdom since 1937. This is a company with a long history of throwing different cultures into a narrative blender, whether it be Polynesian, Norwegian, or basically all of Europe. Some of the oldest European tails include Snow White, Sleeping Beauty, Cinderella, and Beauty and the Beast. Though these movies still hold their own as wonderful and enchanting classics, they don’t have truthful and authentic personalities. These princesses had no inner lives and more importantly, no conflicting impulses. That, in addition to their unrealistically slim body frames, makes them seem too flat and passive. My point being that white-led European and Scandinavian cultural mashups are thick on the ground, while depictions of realistic body types, non-caucasian races and ethnicities and specifically Southeast Asian cultures in Disney’s media remain few and far between.

Fortunately, Raya and The Last Dragon takes its place as a great leap in a series of long-overdue steps toward making the world depicted on screen look more like the world off of it. Kumandra’s five divided regions highlight specific Southeast Asian cultures through its animated architecture and perceived traditions including, but not limited to, Muay Thai, Vietnamese, and Indonesian. Kids of varying ethnicity, race, and culture yearn to see themselves on screen, and a more specific representation of different cultures allows them to more directly relate to thrills that white youth have taken for granted for decades.

Additionally, Raya herself is portrayed as more authentic, realistic and even more complicated than any Disney princess has ever been before. She’s a warrior, with complex relationships, and even more complicated trust issues. Her figure features a smaller bust and a slightly more pronounced jawline than her princess counterparts, and she’s not wearing a ballroom gown and high heels. Raya could have been a traditional princess —another perfect young woman chosen by legacy or magic to save her people. Instead, she possesses fallibility and an uncertainty that often accompanies courage. Her imperfections promote originality and truth, and her flawed nature makes her the most compelling, most sympathetic, and most layered Disney princess in the company’s long history. She’s exactly what makes Raya and the Last Dragon the best Disney animated feature in many years.