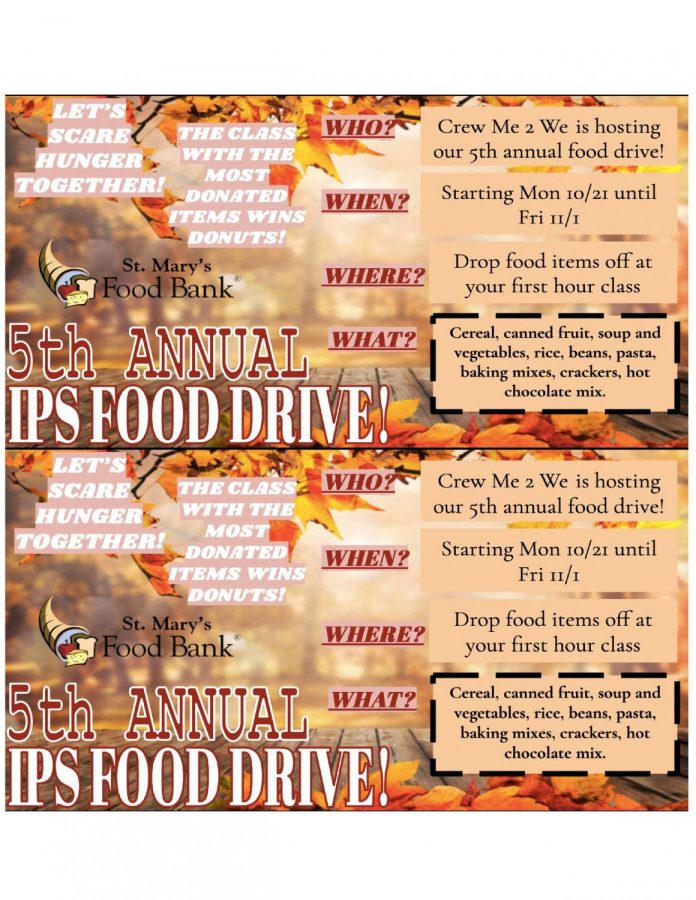 World Hunger. According to Mercycorps.org, about three million children die each year worldwide. Seven-hundred and ninety-five people experience it. Thirteen percent of people left to wonder. Left to growling stomachs. Left to nothing. At Imagine Prep we have a club called Crew Me 2 We that’s trying to change that one step at a time.

Majority of people when hearing ‘world hunger’ habitually think of developing countries, and rightfully so, but we fail to acknowledge the fact that people in our state, in our community, in our schools struggle with having food easily accessible to them. When we have the time to donate or help we always gear that toward those poverty stricken countries, which is great, but it is harder to help those that are so far from us. We have to think, ‘what can I do right now to have a direct impact?’, which is exactly what Crew Me 2 We thought of. They are a “student-led club,” Megan Werner, High school teacher and facilitator of the club, stressed. These kids wanted to lead their school down the path of kindness by creating a We Scare Hunger Food Drive that takes place in October. This food drive is intended to help families at their school, and in their community.

So what is Crew Me 2 We? It is, as stated above, a student leadership organization whose main focus is to be shameless idealists, hoping to make the world a better place one initiative at a time, Werner explained. They are overall very focused on bettering their community and their school in the most directly beneficial ways. Somethings the Crew Me 2 We club does around school specifically is take out recycling in each class, and inform the student body and teachers about appropriate recycling. This is to make school more Eco friendly, Eco conscious, and Eco aware explained Werner. The club also is in-charge of the school garden on the west side of the building where they have plans to revamp the garden to a beautiful sanctuary. The overall goal is to turn it into something that is helpful to the environment. This same drive is seen throughout all the amazing things the Crew does for their community.

President of the club, Daniella Estrada, senior at Imagine Prep, explained that being a part of this club teaches leadership skills and how to take initiative toward the things you wish to change.

“I decided to join Crew Me 2 We freshman year so I could meet new people and be apart of a club that affected not only my school, but my community as well,” Estrada said.

This club benefits the school, and the students in the cub.

“I chose to become president for two years so that I could be more involved in the impacts we make together and apply the leadership skills I’ve learned,” Estrada said.

School, club members, and community! To be able to be partnered with a food bank that serves countless people in their community is something the club is proud to do.

“This food drive allows us to connect not only with our school but connect the food bank to our school as well, which is even more amazing,” Estrada said.

They came up with the idea to do a school food drive upon researching what things are wrong in the community, but the students in this club took it a step further and wanted to find something that was directly impacting people on their school campus. It was then that they became aware that there is a rather large free and reduced lunch population on the campus. It is a heartbreaking struggle that a lot of students aren’t aware that their friends, and peers are being faced with.

“A lot of those families just struggle sometimes with being able to provide food for their families and for themselves, which is just a struggle we don’t think any human should have to go through,” Werner said. “Having food and clean drinking water is one of the basic necessities that allow humans to be the best versions of themselves that they can.”

So, after partnering with St.Mary’s Food Bank the Crew began to go to the food drop off centers once a month where they aid in packing the food, and handing it out to those who need it. To step it up a notch, they decided then to do the food drive in October here at Imagine Prep to be able to be on the other end providing the food.

Werner said that world hunger makes her sad, which is a commonly shared feeling among most human beings. She makes a beautiful point to justify why we have every opportunity to help end world hunger, even if it starts with just one food drive.

“I think that there are an insane amount of resources on this planet, particularly in regards to food, and there is enough food on this planet for every human to eat and not be hungry or to go hungry. It’s a societal issue when we have people who go hungry everyday, especially kids,” Werner said.

It’s an unfortunately true reality. According to Worldhunger.org, we in America alone have 31 percent food loss at the retail and consumer levels, corresponded to approximately 133 billion pounds and $161 billion worth of food. So the fact that we throw that much away when the kid sitting next to you is hungry, the girl across the room is staring at your snack because she didn’t have any to bring to school, the teacher you love couldn’t afford dinner the previous night, it’s unbelievable that those that have the luxury to have a lot of food, waste most of it.

October was a specifically selected month for the Crew, as it is a time not a lot of people are aiming to donate. It is most common to do food drives around holidays, like donating turkeys for Thanksgiving, or ham for Christmas, but as Werner explained, people are starving throughout the year, not just around the holidays.

Crew Me 2 We hopes to meet their goals for their food drive. The Crew usually sets a goal for the school. Last year they set a goal for raising a thousand non perishable food items. This year they are hoping to encourage the donation of food sets!

“What would be even cooler would be if we could provide 100 packages where each package could include ten to twenty items but their more meal based, so it’s like there is a large jar of peanut butter, and they have spaghetti sauce, and they have the noodles,” Werner said.

This would be very beneficial because it would provide 100 Surprise families a weeks worth of meals, versus a weeks worth of random things. Either option is helpful, random foods or meals, but to improve on what we donate and how much, would further benefit the receivers of the donated foods.

“As always, we hope to accomplish something bigger than ourselves by making sure those in our community have the correct resources to live a life they want and live a life full of love,” Estrada explained.

Kind, self-less, and outgoing is what Crew Me 2 We is! Make sure you’re ready to donate food packages and meals in October to help not only your community, but your schoolmates as well.