What does KFC stand for you wonder? Or are you just a person who already knows? Well, if you don’t, you’ve been living under a rock… KFC stands for; Kentucky Fried Chicken.

Now that you know what KFC stands for, you already know what they are best known for and what they sell. They are known for their Kentucky chicken. It is the world’s second-largest restaurant chain after McDonald’s, with almost 20,000 locations globally in 123 countries and territories as of December 2015.

Time for the history part of it; KFC was founded by Colonel Harland Sanders, an entrepreneur who began selling fried chicken from his roadside restaurant in Corbin, Kentucky during the Great Depression. Sanders identified the potential of the restaurant franchising concept, and the first “Kentucky Fried Chicken” franchise opened in Utah in 1952.

Finally the part you’ve been waiting for; THE REVIEW…

I went to KFC and ordered what they call a “$5 fill up” and I got: two piece drum leg and thigh (fried chicken), coleslaw, a biscuit, a medium sized drink, and for dessert; a cookie! I am telling you it was delicious, from the time I got the food and back home, it was still fresh and warm. 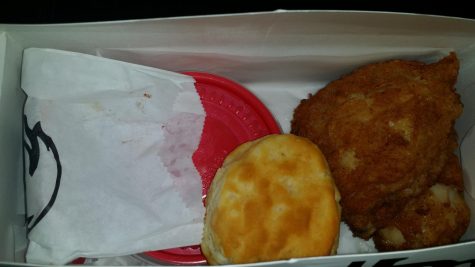 But I gotta tell you there was a bit of a downfall, the coleslaw wasn’t a lot. I wish I could tell you how much there was but I couldn’t find it on the container or online. But if you’re like me and love coleslaw it wasn’t as much as I would have liked.

Overall, it was really good and I would get it again. I would recommend getting it if you love chicken (obviously) or try it just to try it.