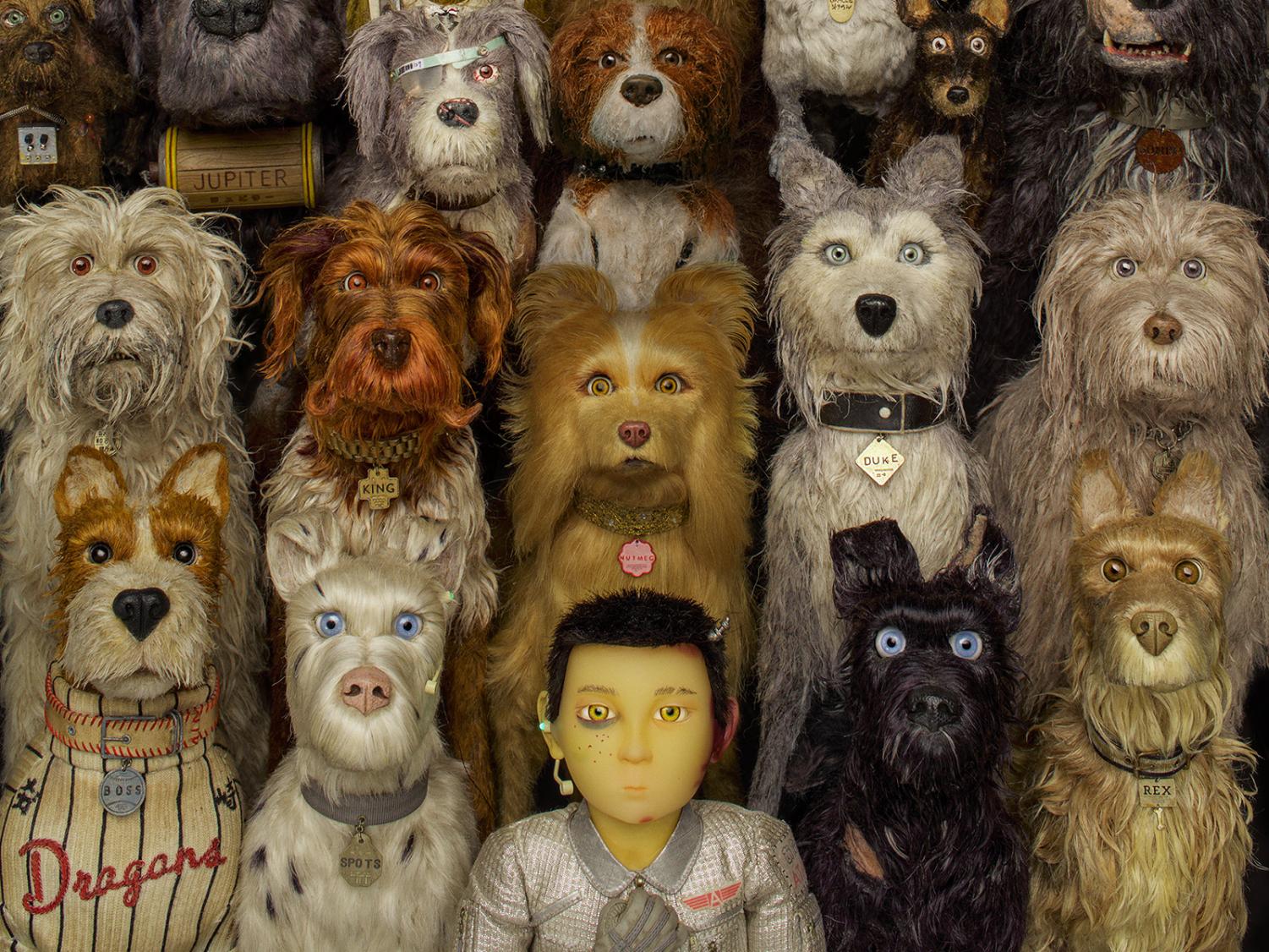 Four years after the success of his previous film, The Grand Budapest Hotel, Wes Anderson has once again decided to grace us with his magic, this time in the form of Isle of Dogs, the film that’s got the tails of fans and film critics across the world wagging! Earning a solid four out of four paws from me, let’s dig into just what exactly about this film has got all the dogs in town yipping and howling with delight and excitement.

Prologue: “The Stage is Set”

In this five-part story, Anderson whisks us away to Megasaki City, Kobayashi, the capital of a dystopian Japan set 20 years in the future. Amidst the outbreak of “Snout Fever” and “Dog-Flu,” canine-targeting illnesses spreading among Megasaki City’s population of beloved good boys (and girls), the authoritarian mayor of the city decides to pass a decree to banish every last dog to Trash Island, despite the desperate pleas and objections of Professor Watanabe, a scientist working on developing a cure for the viruses. With the decree stamped and officially set into motion, Spots, a dog belonging to Atari Kobayashi, the distant orphaned nephew and ward to the city’s mayor, is picked as the first to be sent away to the abandoned, waste-ridden island.

Six months later, we are taken to the now densely dog-populated Trash Island, where we find two packs of dogs fighting over a newly disposed trash bag in hopes of finally getting something to eat. Rex, King, Duke, and Boss, a pack of four “scary, indestructible alpha dogs,” led by our scrappy canine protagonist, Chief, a short-haired Oceanic speckle-eared sport hound, reign supreme after Chief rips off the ear of the opposing pack’s leader and chow down on a long-awaited meal of maggot-infested leftovers. As the pack finishes up, their attention is drawn towards a small plane in the distance, which crash lands shortly after. After the four dogs and a reluctant Chief rush to provide aid, the rescued pilot reveals himself to be none other than Atari Kobayashi, who hijacked a plane to fly to Trash Island and rescue his beloved Spots. Despite the vehement hostility Chief, a former stray that is highly untrusting towards humans, expresses towards the young boy, the other four are quick to join forces with Atari to help him find his doggy companion. From here, the film follows the group’s journey as they search for Spots and uncover the dark truth behind Megasaki City.

Taking into account that the film’s runtime is only 101 minutes, my biggest concern going into Isle of Dogs was how they’d manage to pace everything. However, these concerns were quickly alleviated. The film did an excellent job of making good use of its time, with the film’s various story arcs never once feeling too quick or drawn out. No amount of screentime ever feels like it’s being wasted on filler material and every scene in the movie feels important and necessary to the storyline. Honestly, I don’t think there was a single occasion I caught myself ever being bored by what I was watching onscreen and, judging by the very focused expressions of the people sitting around me, it’s safe to say that a majority of the audience in my theater felt the same way. Everything about the story felt completely original, just like its equally as unique and incredibly well written cast of characters, who the audience quickly find themselves attached to and, in my case, crying over on several occasions by the end of the movie.

Part 2: “The City Lights of Megasaki”

Maybe it’s the fact that his last name starts with the letter “A” or maybe it’s the fact that he’s the epitome of everything a hipster drools over– whatever the reason may be, I feel like most people can agree that Anderson is the king of aesthetics and ambiance (and color palette-ing and precision-level symmetry and desktop background worthy stills, but I digress). As such, it was no surprise to me, a long time Anderson fan, that he once again managed to knock this category straight out of the park. To really immerse ourselves in the feel of a dystopian Japan, Anderson actually had a majority of the characters living in Megasaki City speak in Japanese, with any important documents and text also being written in Hiragana. While this may sound like it could take away from the experience to those who don’t understand Japanese, translators were cleverly incorporated into parts of the film that involve any information that is crucial to the plot. As mentioned by the note at the beginning of the film, all dog barks have also been thoughtfully translated for us, the viewing audience, into English, which means we have the wonderful pleasure of getting to hear Bryan Cranston, Bill Murray, Jeff Goldblum, and Scarlett Johansson be dogs for 101 delightful minutes. While the usage of both Japanese and English might have been odd for some, I felt as though it was a very unique touch, akin to The Godfather’s usage of Italian dialogue to add to its mafia overtones, that helped make the film feel that much more immersive and its Japanese setting even more authentic.

No Anderson film review can be complete without complimenting the aesthetics and, this time around, I think I’d go as far as to say that it’s an unarguable fact that Isle of Dogs is the most visually stunning animated film 2018 can plan on seeing. Several of those off-put by the film’s trailer have noted that they find the look of it to be mildly unsettling or unpleasant to the eyes, but I found that this is anything but the case when you actually sit in and watch the film. The more gritty look of all the characters, while being Anderson’s iconic look for his stop motion films, felt appropriate and befitting of a film centered around a Japanese dystopia and the same could also be said about the film’s dark and neutral color palette, which was a complete 180 compared to the pastel daydream that was The Grand Budapest Hotel. I strongly believe that just about every frame could be ripped from the film and taken to an art exhibition because of how beautifully Anderson staged and coordinated everything. Anderson doesn’t fail to serve up yet another piping hot and stunningly plated masterpiece and hipsters and Tumblr users alike can rejoice over the fact that they’ll have even more stills to use for the aesthetic blogs.

As always, Alexandre Desplat, being the creative mind behind the iconic soundtracks of Anderson’s Fantastic Mr. Fox, Moonrise Kingdom, and The Grand Budapest Hotel, didn’t fail to amaze with yet another one-of-a-kind soundtrack that deserved its very own paragraph of recognition. Unlike the scores used in the aforementioned films, which harbor a more whimsical and curious tone, Isle of Dogs felt significantly more chilling and ominous in contrast. Even the more lighthearted scores, such as the ones that played while Atari and the pack of dogs ventured through Trash Island, carried some sense of unease that added to the dystopian feel of the film. The thoughtful combination of traditional Japanese flutes and taiko drums is used in the perfect amount throughout the soundtrack, helping to add to the intensity and emotional feel of different scenes without ever feeling dull or racially stereotypical. It goes without saying that the Isle of Dogs soundtrack effortlessly manages to outshine its predecessors with its unique and original score and, speaking as someone who is currently listening to it as they write this very review, I mean it when I say that the soundtrack alone is truly a special journey that your ears deserve to experience and appreciate at least once during your lifetime.

Of course, it should come as no surprise that I decided to save the best category for last. Those who know me best know that I’m a longtime connoisseur of all things related to stop motion animation and I’d certainly be lying if I said that, even if Anderson managed to turn this film into an utter disappointment (by some sort of unearthly anomaly), I wouldn’t love it all the same solely for its brilliant usage of stop motion. Thankfully, this was anything but the case, as the writing turned out to be equally as phenomenal as the animation! But, enough about the writing– let’s break down the animation, shall we? I’m talking frame by frame, of course!

Let me start by saying that the level of painstaking detail that went into the film’s animation is absolutely insane. I truly believe that the amount of intricate details Anderson sprinkled throughout Isle of Dogs can’t be fully appreciated until the film has been watched in its entirety at least three times, which I unfortunately have not had the pleasure of being able to do yet. From nose twitches and realistic movement of fur moving in the wind, which I assume was done through the meticulous process of moving each individual hair strand after every frame, to the lines of sweat dripping down the forehead of the stressed translator and carefully choreographed background movement, however, one watch was all it took for me to realize that Anderson and his team of animators did not let a single detail go unnoticed. Even the techniques used throughout the film were undeniably crafty, my most favorite instance of this being the dust and smoke clouds made of various colored stuffing. Such a technique is usually seen in older or low budget productions and, as such, recent stop motion films have turned to CGI smoke effects for the cleaner and more uniform look. The animation department behind Isle of Dogs decided to use this fact to their advantage and, by masterfully incorporating the technique into the film, they manage to really add to that iconic droll touch that helps set Anderson’s work apart from all the others. Having convincingly and masterfully breathed life into the beautifully designed stop motion puppets and sets used in Isle of Dogs, it’s mind blowing to know that all of the talent that is displayed throughout the film was accomplished by a group of just 27 incredibly talented animators and only helps to make you appreciate the unimaginably intense labor and tears that went into this show stopping film’s production even more.

Honestly, I can’t think of a single thing to complain about other than the fact that the film wasn’t more readily available in the first few weeks of its release. The fact that it was only available for viewing at Scottsdale Fashion Square’s Harkins Theater was a bit upsetting, but the experience alone (and the super posh reclining seats) definitely made the long drive worthwhile. Would I go through the trouble of driving all the way down to Scottsdale to watch it it a second time? Again and again, like a dog fetching the same stick over and over. Thankfully though, this issue has since been fixed and can now be seen at the AMC Theater located in Westgate and the Harkins Theaters located in Arrowhead and Estrella Falls, among many other theaters throughout the valley!

Everything about this film was nothing short of an absolute masterpiece, from the beautifully written plot and characters, to Alexandre Desplat’s brilliantly composed scores, right down to the breathtaking animation. This film has quickly become a top favorite of mine and I mean it from the bottom of my heart when I say that I’ve fallen in love with just about everything that it is. Would I consider this film a cinematic, dare I say, doggy treat? Yes. Yes I would.

If you want a picture to show with your comment, go get a gravatar.