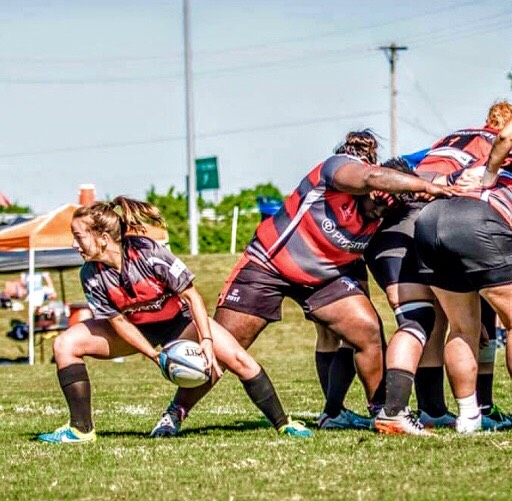 No, it’s not football, it’s rugby

This European originated sport has made its way into Storm sports due to the nostalgia of not only a new teacher, but also a new student at Imagine Prep. However, this student is not like many others at this school, this student is from the other side of the world.

Sophomore Rita Sauret, is a foreign exchange student at Imagine Prep and is from Barcelona, Spain. Before she came to the States to study abroad, she was introduced to the sport back in her hometown.

¨I love this sport very much,¨ Sauret said. ¨I first started playing on a rugby league last year when I was in Spain.¨

Sauret described who brought the sport to Imagine Prep and gave a little insight on what exactly this school is going to do with rugby.

“Ms. Papacostas and I are actually the ones that came up with the idea,” Sauret said.”It is not a sport that you would play competitively; it is a club that is just for fun. We won’t go against any teams.”

Anne Papacostas, is a new high school physics teacher and is currently the coach for the new rugby club at the Prep. Papacostas is very knowledgeable about rugby and explained her past experience with this unique sport.

“I started playing when I was a freshman in college, so when I was 18,” Papacostas said. “I’ve been playing it ever since,  so almost 10 years.¨

Papacostas described the new rugby club that is going to be formed very soon at the Prep and really encourages everyone to try it out.

“We are just getting started,” Papacostas said. “There are a lot of kids that are really interested, so we are just going to have to start with the basics and learning how to play. It’s Coed, everybody is welcome, no matter if you haven’t done any sport in your life or if you’ve played all three seasons. Anyone can play rugby because there is a position for every body type. There is a position where the player needs to be big and strong to defend, and there is a position where you need to be small and fast that can make you sneak past opponents.”

Even though rugby involves a ball that is similar to an American football, Papacostas explained how rugby does have its differences.

“Rugby is very different,” Papacostas said. “There are no pads, so you just have to play full contact with just your body. But I think because of that, no offense to football, that it’s a smarter game because there is no stoppage. So, if you get tackled, the play continues and you just have to make it work. There are no pauses unless you get injured.”

Due to the large amount of body contact that this game requires, Papacostas described that she has to make a few adjustments for the safety of the players in the club.

“We are just going to play touch rugby, so no tackling down anyone,” Papacostas said. “However, if students would like to learn how to tackle properly and know how to take a hit and fall in a way you don’t injure yourself, them I would be more than happy to teach them.”

Even though rugby is a very interesting sport that needs more recognition, Papacostas explained why it’s not possible for the sport to be an official competitive sport here at the Prep.

“It’s not big in the United States,” Papacostas said. “It’s getting bigger in the collegiate level and there are some professional teams that are getting going. However, at the high school level, it doesn’t really exist; it did in Texas a lot more, so certain states are getting into it, but I haven’t seen a lot of it in Arizona.”

This amazing opportunity to get the chance to learn this new sport won’t be around too long because Papacostas will not return to the Prep after this year to continue coaching the rugby club. So join the club, show what you got, and remember, it doesn’t matter how big or how small you are, because rugby will always have a position that will be just right for you.